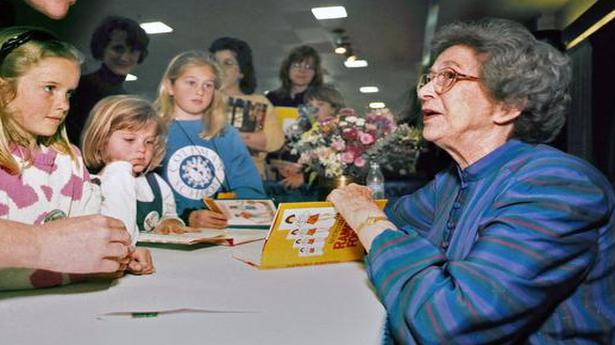 Children worldwide got here to like the adventures of Huggins and neighbors Ellen Tebbits, Otis Spofford, Beatrice “Beezus” Quimby and her youthful sister, Ramona

Beverly Cleary, the celebrated children’s author whose reminiscences of her Oregon childhood have been shared with tens of millions by means of the likes of Ramona and Beezus Quimby and Henry Huggins, has died. She was 104.

Cleary’s writer HarperCollins introduced Friday that the author died Thursday in Carmel Valley, California, the place she had lived because the Sixties. No explanation for loss of life was given.

Trained as a librarian, Cleary did not begin writing books till her early 30s when she wrote “Henry Huggins,” printed in 1950. Children worldwide got here to like the adventures of Huggins and neighbors Ellen Tebbits, Otis Spofford, Beatrice “Beezus” Quimby and her youthful sister, Ramona. They inhabit a down-home, healthful setting on Klickitat Street — an actual road in Portland, Oregon, town the place Cleary spent a lot of her youth.

Among the “Henry” titles have been “Henry and Ribsy,” “Henry and the Paper Route” and “Henry and Beezus.” Ramona, maybe her best-known character, made her debut in “Henry Huggins” with solely a quick point out.

“All the children appeared to be only children so I tossed in a little sister and she didn’t go away. She kept appearing in every book,” she mentioned in a March 2016 phone interview from her California residence.

Cleary herself was an solely baby and mentioned the character wasn’t a mirror.

“I was a well-behaved little girl, not that I wanted to be,” she mentioned. “At the age of Ramona, in those days, children played outside. We played hopscotch and jump rope and I loved them and always had scraped knees.” In all, there have been eight books on Ramona between “Beezus and Ramona” in 1955 and “Ramona’s World” in 1999. Others included “Ramona the Pest” and “Ramona and Her Father.” In 1981, “Ramona and Her Mother” gained the National Book Award.

Cleary wasn’t writing not too long ago as a result of she mentioned she felt “it’s important for writers to know when to quit.” “I even got rid of my typewriter. It was a nice one but I hate to type. When I started writing I found that I was thinking more about my typing than what I was going to say, so I wrote it long hand,” she mentioned in March 2016.

Although she put away her pen, Cleary re-released three of her most cherished books with three well-known followers writing forewords for the brand new editions.

Actress Amy Poehler penned the entrance part of “Ramona Quimby, Age 8;” author Kate DiCamillo wrote the opening for “The Mouse and the Motorcycle;” and author Judy Blume wrote the foreword for “Henry Huggins.” Cleary, a self-described “fuddy-duddy,” mentioned there was a easy motive she started writing children’s books.