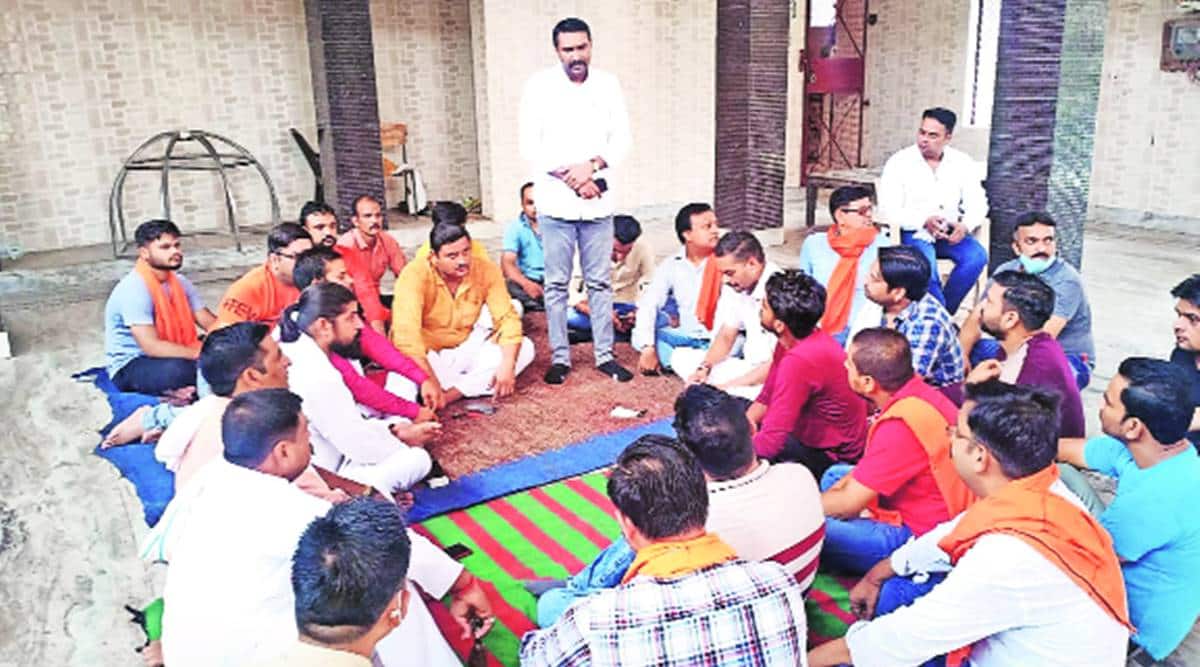 Two days after a BJP worker was overwhelmed up throughout a panchayat on the residence of a member of the Tikait household in Baghpat’s Doghat city, members of the Brahmin group held a gathering at a temple in Baraut on Sunday night and threatened to launch an agitation if no action was taken in opposition to these named accused in the FIR at Doghat police station.

The Tikaits are main the continued farmer protest in opposition to the three agricultural legal guidelines introduced by the Centre.

A video of the incident went viral throughout social media platforms. “Saksham Sharma (the victim) is a respected member of the BJP in Baghpat and was beaten up by BKU (Bharatiya Kisan Union) workers and others during a panchayat held in the wake of a dispute over the recent election for gram pradhan. An FIR on false charges has also been filed against Saksham at Doghat police station,” Pankaj Shastri, a pacesetter of the native Brahmin group, mentioned after the assembly on the Panchmukhi temple in Baraut on Sunday afternoon.

The chief of the BJP’s Baghpat unit, Surajpal Gujjar, together with different BJP staff, visited Saksham on the district hospital on Sunday morning and guaranteed that the accused received’t go unpunished. “An FIR has been filed by Saksham’s brother in connection with the attack and we hope the police will act soon,” Surajpal mentioned.

“FIRs have been filed by both the parties in the case but no arrest has been made so far. We are investigating the case and will take strong action once our inquiry is completed,” Alok Singh, Deputy SP, Baraut, mentioned.

Police mentioned the BJP worker had opposed the election of Brijendra because the gram pradhan of Mujijabad in the latest panchayat polls. The pradhan was arrested on Friday in reference to the homicide of native cement provider Pradeep Atreya in Baghpat.

Upset over the pradhan’s arrest, staff of the BKU and the Samajwadi Party (SP) convened a panchayat on the residence of Rajendra Chaudhary, the nephew of the outfit’s president Naresh Tikait, in Doghat city on Friday night. “Saksham Sharma happened to be driving by Rajendra Chaudhary’s residence with a friend when a group of BKU workers and others forced them to pull over and launched into an assault on him. They dragged Saksham to the panchayat where he was beaten up again till he fell unconscious. They also snatched Rs 30,000 in cash that Saksham had on him at the time of the incident,” learn the FIR filed by Manoj, the sufferer’s brother , at Doghat police station.

The counter FIR filed by Manish Tomar of the BKU mentioned the BJP worker was in a drunken state and raised a pistol at fellow members who had been on their option to attend a panchayat. “We tried to placate him but he started misbehaving with us and what happened thereafter was beyond our control,” Tomar mentioned.

He added that the panchayat was convened to resolve the longer term course of action in reference to arrest of the Mujijabad gram pradhan. “Brijendra has been falsely been implicated in the murder of cement dealer {Pradeep Atreya). Local police officers have been harassing BKU and SP workers at the behest of the state government from the time the BJP fared poorly at the panchayat polls in Baghpat,” Tomar mentioned.