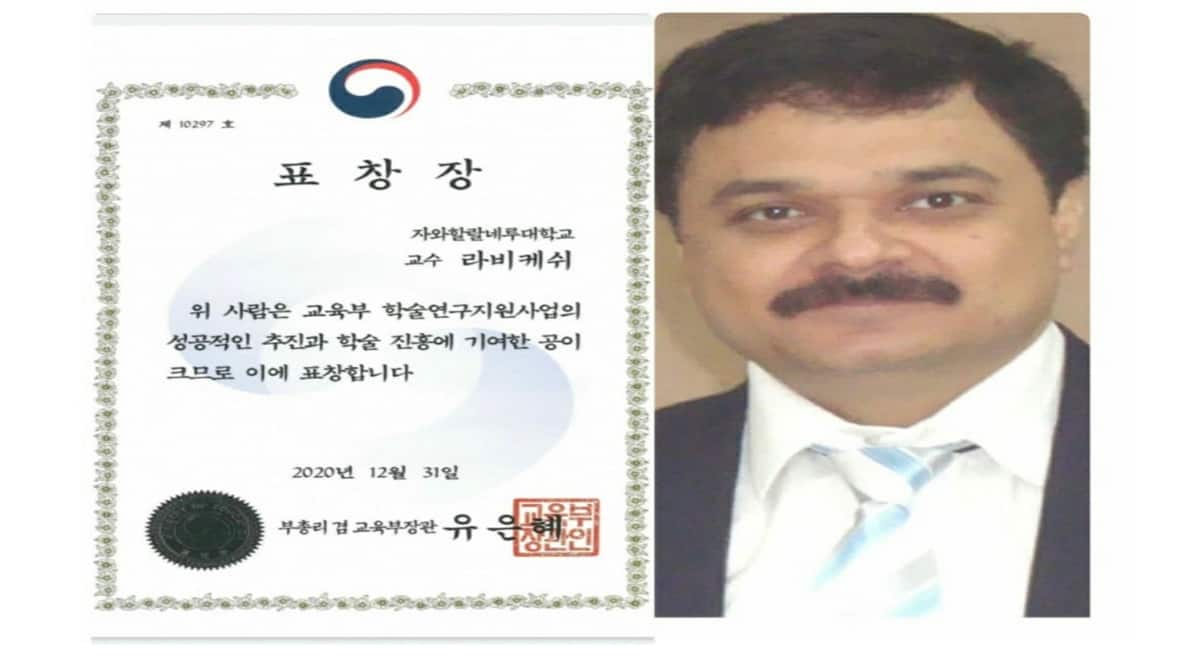 Jawaharlal Nehru University’s  professor Ravikesh has been awarded the South Korean Deputy Prime Minister’s quotation for his contributions and analysis in the sector of Korean studies in India, the Korean Cultural Center in New Delhi introduced on February 13. The award was collectively offered by the Deputy Prime Minister and South Korea’s Department of Education.

Professor Ravikesh is the chairperson of Centre for Korean Studies, School of Language, Literature & Culture Studies at JNU and has over twenty years of analysis expertise in the sector of Korean Studies, in keeping with a press launch by the college.

On February 9, JNU Vice-Chancellor Mamidala Jagadesh Kumar additionally issued a press release on Twitter following the presentation of the award.

Prof. Ravikesh, Centre for Korean Studies, JNU has been awarded with the celebrated Citation of the Deputy Prime Minister and Education Minister of Republic of Korea in recognition of his contributions in analysis and promotion of educational excellence in Korean Studies in India. pic.twitter.com/gI3H8bZsPj

Having noticed the expansion in reputation and the demand for Korean language and tradition in India over the previous decade, in 2016, Prof. Ravikesh began a undertaking titled “Emerging Korea and Korean Studies in India and South Asia: Comparative and Inter-disciplinary Approaches” primarily based at JNU, involving college from varied tutorial establishments in India, Sri Lanka, Bangladesh, Myanmar, and Nepal, that enables and assists students who want to interact in collaborative analysis and be taught Korean language, literature and tradition, even when their core analysis is just not East Asian studies.

Some of Prof. Ravikesh’s chosen publications embrace ‘India and Korea: Perspectives on Language, Literature and Culture’ supported by the Korea Foundation (2008), ‘Korea: EkParichay’ (translated & edited; 2013) supported by The Ministry of Cultural and Tourism, Republic of Korea, ‘Modern Korean Literature for Foreigners’ (co-authored in Korean; 2014), ‘Korean Studies in Indian & South Asia; Vol-III’ (2016) and ‘Dimensions of India-Korea Relations’ (2019).

The college was the primary establishment of upper schooling in India to supply programs in Korean language, literature and tradition, when it launched a pre-degree diploma course in 1976 and later, a full time B.A. (Hons) programme in 1995, adopted by an M.A programme in 1998.

Acknowledging the rising demand for Korean language in the nation, notably pushed by fans of Korean standard tradition, in 2020, Korean was launched as a selection for second language in faculties on the secondary stage; a results of the work and petitions of the Embassy of South Korea in India, the Korean Cultural Center and Korean language educators in India.