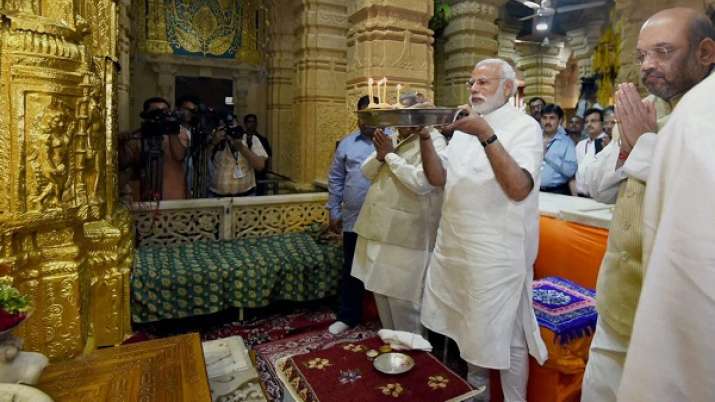 Prime Minister Narendra Modi was on Monday unanimously chosen as the brand new chairman of the trust which manages the world well-known Somnath Temple at Prabhas Patan city in Gujarat’s Gir-Somnath district, turning into the second PM to hold the post.

Modi, one of many trustees of the Shree Somnath Trust, was named to the highest post unanimously throughout a gathering which he attended by through video conferencing.

“The trustees unanimously chose Prime Minister Shri Narendra Modi as the next chairman of the Trust, to guide it in the times to come. The Prime Minister accepted the responsibility and also appreciated the efforts of Team Somnath,” mentioned a PIB launch in Delhi.

“He expressed hope that together, the trust will be able to further improve infrastructure, accommodation arrangements, recreation facilities and help establish stronger connection of the pilgrims with our great heritage. A review of the facilities, ongoing activities and projects was also carried out during the meeting,” it mentioned.

At the digital assembly, the trustees paid tributes to former Gujarat Chief Minister late Keshubhai Patel, the ex-chairman of the Trust.

After former PM Morarji Desai, Modi is the second Prime Minister who has been appointed the chairman of the temple trust. As per trust data, Modi has develop into the eighth chairman of the trust.

“While Shah proposed the name of PM Modi as chairman, I seconded it and the other trustees then unanimously elected the PM as the new chairman. The trustees would hold another meeting to discuss future plans,” Laheri advised reporters after the assembly on Monday night.

As per the data, Desai had served because the chairman between 1967 and 1995. Besides Desai and Patel, among the illustrious previous chairpersons of the trust embrace Jamsaheb Digvijaya Singh Ji, Kanaiyalal Munshi, Jay Krishna Hari Vallabh, Dineshbhai Shah and Prasanvadan Mehta, the discharge mentioned.

Owner of SUV which caused explosives scare near...

Azoospermia: Know what it is and how it...